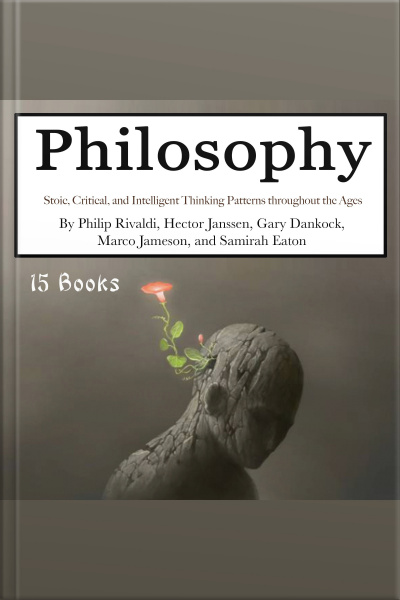 Philosophy Stoic, Critical, and Intelligent Thinking Patterns throughout the Ages

This is a 15-book combo with the following topics in it:

Topic 1: In this book, you will find information about five different philosophers, some of them well-known, others less. But all of them had a significant impact on the ancient world and how people thought, as well as some of our modern-day ideas.

Topic 2: Stoicism is a concept that has been studied more and more lately. The philosophy that dates back all the way to Socrates has been significant in many people’s lives. So, today, we will expand on what stoicism is, where it originated from, and how you can use it in your life to become a better person and achieve more.

Topic 3: Skepticism is a philosophical movement that has been in existence for centuries. And even though some may call it old and outdated, studying this concept can bring enlightenment to the soul. Sometimes, being skeptical is erroneously connected to simply being negative. But this assumption is far from the truth.

Topic 4: Critical thinking means, among others, that you look at multiple sides of a controversial topic, that you can stay objective and put away your biases until you have reached a firm conclusion based on verifiable facts. This skill is highly valuable in job interviews, relationships, and everyday life.

Topic 5: By now, you may have heard about the differences between regular intelligence and emotional intelligence. But what makes a person really emotionally intelligent? And why is it so important to be emotionally intelligent? Those are some of the things we will discuss in this book. Other topics include the concept of personal intelligence, social media and its negative repercussions, using emotions to build better relationships, and decreasing procrastination by mastering your emotions at a much higher level.